History and politics are replete with zigs and zags into all kinds of unexpected directions. Take for example, the Shah of Iran. He looked impregnable on his throne until he was toppled by massive street demonstrations. Who could have predicted that the suicide of a street vendor in a small town in Tunisia would lead to the overthrow of an entrenched dictatorship and revolts across the Arab Middle East? Or that a popular uprising in Armenia would lead to the ouster of an oligarchic regime in that country or that a real estate mogul and reality TV host would become president of the U.S.? History and politics are full of surprises. Interview by David Barsamian.  2 CDs 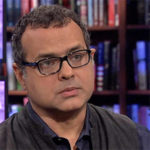 Vijay Prashad is a historian and journalist. He is the director of Tricontinental: Institute for Social Research, based in Argentina, Brazil, South Africa, and India. He is also editor of LeftWord Books, based in New Delhi. Additionally, he is the chief correspondent for Globetrotter. He has written many books, including The Poorer Nations: A Possible History of the Global South and Red Star Over the Third World.

Be the first to review “HISTORY” Cancel reply