What It Takes to Win

In times of despair and distress there may be the temptation to succumb to apathy and cynicism. What’s the use? Who cares?, etc. That should not be your response. Finding kindred spirits and allies and working on issues important to you such as the environment, war and peace, healthcare, affordable housing, racism, misogyny, homophobia, education, or just getting your town to put in a stop sign at a dangerous intersection. Sure there are tedious meetings that go on too long. And people who enjoy hearing themselves speak. But you work through that and in the end you feel so much better about collaborating with others to achieve positive goals. It’s much better than getting bogged down in internal disputes, factionalism and mutual recrimination. That’s a formula for getting burned out. What does it take to win? 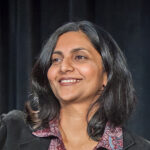 Kshama Sawant is a member of the Socialist Alternative. She was elected to the Seattle City Council in 2013. She is the first socialist to win a citywide election in Seattle since 1916. She was reelected in 2015.

2 reviews for What It Takes to Win