This contentious debate over Oliver Stone’s film JFK and the assassination was recorded before a sell-out crowd at New York’s Town Hall. Stone is joined by Norman Mailer, Nora Ephron and Edward Jay Epstein. After their presentations they are questioned by Christopher, Hitchens, Bill Schaap and Max Holland as well as the audience. They discuss, among other topics, the blending of history and fiction, the lone gunman theory, trajectory of bullets, sloppy forensic work, Jim Garrison, Fletcher Prouty and whether Kennedy was killed by the deep state because he was contemplating withdrawal from Vietnam. Stone denounced the media and government, citing the “dinner party parochialism of people in New York and Washington who decide what’s good for the world, what is right, what is official, what is history.” As an antidote to that “very narrow prism,” he recommends Howard Zinn’s A People’s History of the U.S. The event was moderated by Victor Navasky. 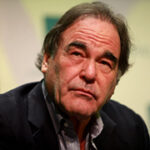 Oliver Stone is a screenwriter and film director. He won an Academy Award for Best Adapted Screenplay as writer of Midnight Express. He directed Platoon, for which he won the Academy Award for Best Director; the film was awarded Best Picture. Platoon was the first in a trilogy based on the Vietnam War, in which Stone served as an infantry soldier. He continued the series with Born on the Fourth of July—for which he won his second Best Director Oscar—and Heaven & Earth. Stone’s other films include Salvador; Wall Street and its sequel Money Never Sleeps; The Doors; Natural Born Killers, JFK; Nixon; W.; and Snowden.

Be the first to review “Hollywood, History & JFK” Cancel reply