No doubt wanting to build on its “enormous successes” and “progress” (Cheney) in Iraq and Afghanistan the Bush administration is now threatening Iran with war. For the propaganda masters it’s a dream. All they have to do is change the q in Iraq to an n and they are good to go. They can recycle the same scripts. Ahmadinejad is the new Hitler or Saddam or bin Laden or maybe all three combined. Iran is “a growing threat,” the vice-president warns us. CNN’s Glenn Beck says, “Iran is a global threat as big as we’ve seen since the Nazis.” Interview by David Barsamian. 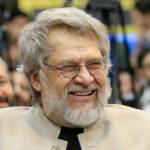 Nader Talebzadeh was a legendary Iranian journalist, TV producer, documentary and feature filmmaker. After attending Columbia he returned to Iran after the Islamic Revolution. He was based in Tehran. He died in 2022.

Be the first to review “Dateline: Tehran” Cancel reply