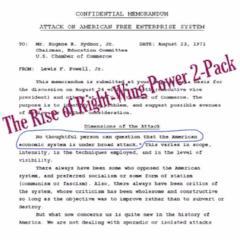 The Rise of Right-Wing Power 2-Pack

Class and power are closely correlated, That societies have a ruling class is derided as passe Marxist rhetoric. But to deny its existence is folly. Class can be measured by one’s income and savings, and ownership of stocks, bonds and property. Power is more difficult to calibrate. It is the capacity of a ruling class to produce outcomes that enrich and enhance its status. There are many forms of power such as economic, political and military. That a ruling class acts to promote its interests by getting together and planning seems only logical. To simply dismiss these meetings as conspiracies is absurd. Power brokers and corporate elites don’t meet in dark, smoke filled back rooms or on amusement park merry-go-rounds but rather they gather in well-appointed offices with plush carpets and comfortable chairs and are served croissants and gourmet coffee.

Michael Parenti is one of this country’s foremost independent political analysts. Cornel West calls him, “a towering prophetic voice.” He has taught at major colleges and universities in the U.S. and abroad. He is the author of numerous books including the classic Democracy for the Few, Power and the Powerless, The Face of Imperialism, and The Assassination of Julius Caesar.