In this interview with David Barsamian at the 8th Annual Traditional Agriculture & Sustainable Living Conference, Clayton Thomas-Muller talks about his role in the Idle No More movement and indigenous-led environmental activism in Canada and around the world. 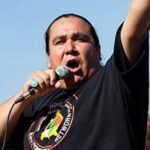 Clayton Thomas-Muller is a member of the Mathias Colomb Cree Nation also known as Pukatawagan in Northern Manitoba, Canada. Based out of Ottawa, Ontario, Canada, Clayton is the co-director of the Indigenous Tar Sands (ITS) Campaign of the Polaris Institute as well as a volunteer organizer with the Defenders of the Land-Idle No More national campaign known as Sovereignty Summer.

Be the first to review “Idle No More” Cancel reply