The Poetry of Cesar Vallejo

Cesar Vallejo (1892-1938) is Peru’s most important poet of the 20th century. He was of mestizo origin, a fact which greatly influenced his poetry. He wrote often of the plight of the poor. In this program you will hear some of his finest poems read in Spanish and English. One of his most famous poems is “Masa.” It is sung by Daniel Viglietti of Uruguay.

With the participation of Yvonne Guillon Barrett of the University of Colorado and Victor Berger.

Funded by the Colorado Endowment for the Humanities.

Produced and hosted by David Barsamian as part of his Pyrenees to the Andes series on poetry from Spain and Latin America broadcast on KGNU. 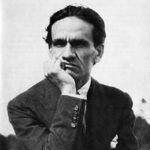 Cesar Vallejo (1892-1938) is Peru’s most important poet of the 20th century. He was a mestizo, a fact which strongly influenced his poetry. Deeply rooted in his mixed European and Peruvian Indian heritage, his poetry expressed universal themes related to the human condition. He wrote of the poor and impoverished.