Where was America During the Holocaust?

The U.S., during WWII, under FDR did little to help European Jews who were seeking to flee from the Nazis. Very few Jewish refugees were allowed into the U.S. Roosevelt would not bomb the rail lines leading to Auschwitz. The lack of compassion and the refusal to increase quotas for endangered Jews makes this one of the dark episodes in U.S. history. 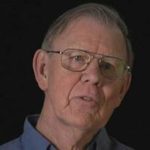 David Wyman taught history at the University of Massachusetts, Amherst, where he also chaired the Judaic Studies program. He was regarded as a leading expert on the U.S response to the Holocaust. He’s written several books on the topic, most notably The Abandonment of the Jews: America and the Holocaust, 1941-1945. He passed away in 2018.

Be the first to review “Where was America During the Holocaust?” Cancel reply