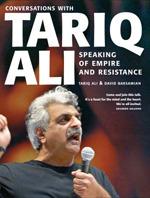 Speaking of Empire and Resistance: Conversations with Tariq Ali

A prolific and eloquent writer, Tariq Ali is also a captivating conversationalist. Speaking of Empire and Resistance captures him at his provocative best. This series of interviews with David Barsamian brings together Ali’s view on a wide range of topics, including: the fate of modern day Pakistan; the occupation of Afghanistan and Iraq; the intractable Israeli-Palestinian conflict; the state of the Islamic world, and the continuing significance of imperialism in the 21st century – all examined with Ali’s celebrated fluency and wit. Speaking of Empire and Resistance reinforces Ali’s reputation as one of the most perceptive and engaging figures of today’s left.

Tariq Ali, an internationally renowned writer and activist, was born in Lahore, Pakistan. For many years he has been based in London where he is an editor of New Left Review. A charismatic speaker, he is in great demand all over the world. In his spare time, he is a filmmaker, playwright, and novelist. He is the author of many books including The Clash of Fundamentalisms, Pirates of the Caribbean, Speaking of Empire & Resistance with David Barsamian, The Duel: Pakistan on the Flight Path of American Power, The Obama Syndrome, The Extreme Centre and The Forty-Year War in Afghanistan: A Chronicle Foretold.

Be the first to review “Speaking of Empire and Resistance: Conversations with Tariq Ali” Cancel reply