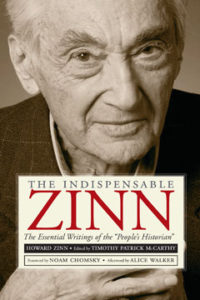 The Indispensable Zinn: The Essential Writings of the “People’s Historian”

When the historian Howard Zinn died in early 2010, millions mourned the loss of one of our foremost intellectual and political guides: a historian, activist, and truth-teller who, in the words of Bob Herbert, “peel[ed] back the rosy veneer of much of American history.”

Designed to highlight Zinn’s most important writings, The Indispensable Zinn includes excerpts from Zinn’s bestselling A People’s History of the United States; his memoir, You Can’t Be Neutral on a Moving Train; his inspiring writings on the civil rights movement; and the full text of his celebrated play Marx in Soho. Noted historian and activist Timothy Patrick McCarthy provides essential historical and biographical context for each selection.

With an introduction from Zinn’s former Spelman College student and longtime friend Alice Walker and an afterword by Zinn’s friend and colleague Noam Chomsky, The Indispensable Zinn is both a fitting tribute to the legacy of a man whose “work changed the way millions of people saw the past” (Noam Chomsky) and a powerful and accessible introduction for anyone discovering Zinn for the first time. Includes Barsamian’s “How Social Change Happens” interview with Zinn.

Be the first to review “The Indispensable Zinn: The Essential Writings of the “People’s Historian”” Cancel reply