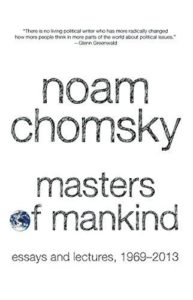 In this collection of essays, many in book form for the first time, Noam Chomsky exposes the real nature of state power. With unrelenting logic, he holds the arguments of empire up to critical examination and shatters the myths of those who protect the power and privilege of the few against the interests and needs to the many.

Be the first to review “Masters of Mankind” Cancel reply