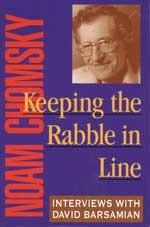 A map of an emerging economic regime.

In a series of interviews from 1992 to 1994, Noam Chomsky outlines his views on a wide range of topics, including:

Be the first to review “Noam Chomsky: Keeping the Rabble in Line” Cancel reply