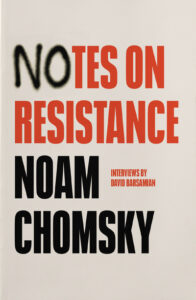 In this completely original set of interviews between the legendary duo of Noam Chomsky and David Barsamian, the two confront topics such as the pandemic, the wealth gap (made worse because of the pandemic), climate destruction, the increasing power of the corporate-owned media, systematic racism,  Big Tech, and more.

Noam Chomsky is one of the most cited scholars in human history. He ranks right up there with Aristotle and Marx, and this book reaffirms his esteemed reputation. Notes on Resistance will inspire all those struggling for human liberation.

2 reviews for Notes on Resistance