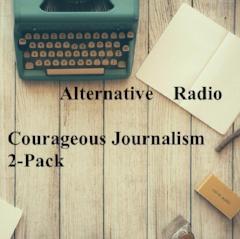 "An informed democracy will behave in a responsible fashion," said Jefferson. And what happens to democracy when one of the major pillars of information, journalism is under attack from the highest office in the land? We live in an era where the president openly singles out journalists by name and denounces them. And when he’s at a rally he incites his followers to hiss and boo the press. “Fake news,” he tweets. The media are “a stain on America.” Apparently, any journalist that does not express admiration and adoration for the president is not doing his or her job. Only Fox can be trusted. Journalism, at least in theory, has one essential job: to dig out and communicate the facts about what powerful individuals and institutions are doing. And to hold them accountable. No one is above criticism.

Renowned Indian writer Arundhati Roy once assured an American audience that the United States might enjoy a collective sigh of relief when it finally gives up on being an empire. But empires die hard. In response to eroding economic predominance, military spending in the U.S. has skyrocketed. Simultaneously, as if in response to legal matters that encircle the U.S. president, we see a more and more bellicose foreign policy. The "winds of war" is a terrible term. As if war were as natural as the wind. In fact, wars are trumped up, sold, hook-line-and-sinker.

Abby Martin is an investigative reporter and television host of The Empire Files on TeleSUR.

Jeremy Scahill is an award-winning journalist and author of the bestsellers Blackwater and Dirty Wars. He has reported from war zones around the world. His work has sparked several congressional investigations. He is a founding editor of The Intercept. He was also the subject of the film Dirty Wars, which was nominated for an Academy Award.

Be the first to review “Courageous Journalism 2-Pack” Cancel reply