Produced and hosted by David Barsamian as part of his Ganges to the Nile series. 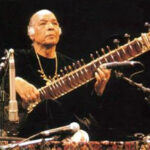 Maestro, Ustad, Vilayat Khan (1928-2004) was an incomparable virtuoso of sitar. He was born into a family of distinguished musicians. His father was Inayat Khan and his grandfather was Imdad Khan. His singular contribution to Indian sitar was the development of gayaki ang, vocal style, where the sitar mimics the human voice. The speed and clarity of his sitar playing was the stuff of legend. He influenced a generation of sitar players. His son Shujaat Khan continues the tradition.