The Poetry of Gabriela Mistral

Features Gabriela Mistral’s poetry read in both Spanish and in English translation as well as commentary on her life and work by Yvonne Barrett of the University of Colorado. Prof. Barrett is known for her knowledge and scholarship of contemporary Latin American poetry. 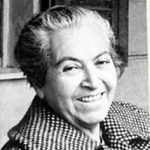 Gabriela Mistral (1889–1957) was a Chilean poet, diplomat, educator and feminist. She was the first Latin American and, so far, the only Latin American woman to receive the Nobel Prize in Literature, which she did in 1945 “for her lyric poetry which, inspired by powerful emotions, has made her name a symbol of the idealistic aspirations of the entire Latin American world.” Some central themes in her poems are nature, betrayal, love, sorrow and recovery,  and Latin American identity as formed from a mixture of Native American and European influences. As an educator she pioneered programs in adult education. Her great concern for children helped to create UNESCO.