Workable Solutions to the Climate Crisis

The UN Intergovernmental Panel on Climate Change uses stark and dire language in its latest report. It says, “The cumulative scientific evidence is unequivocal: Climate change is a threat to human well-being and planetary health. Any further delay in concerted anticipatory global action on adaptation and mitigation will miss a brief and rapidly closing window of opportunity to secure a livable and sustainable future for all.” It warns of “irreversible” trends that will render parts of Earth “uninhabitable.” There was brief media coverage of the IPCC report and then it disappeared. There are workable solutions to slow down and stabilize the warming thus avoiding some catastrophic impacts. But as the co-chair of the report says, “It’s now or never.”

Our planet and humankind are in danger. The warnings coming from UN Secretary-General Antonio Guterres could not be more unambiguous. He says we are heading “towards an unlivable world. We are on a fast track to climate disaster. Major cities under water. Unprecedented heatwaves. Terrifying storms. Widespread water shortages. The extinction of a million species of plants and animals. This is not fiction or exaggeration,” he continues. “It is what science tells us will result from our current energy policies. We are on a pathway to global warming of more than double the 1.5-degree limit agreed in Paris. If you care about justice, and our children’s future, I am appealing directly to you. Climate promises and plans must be turned into reality and action, now. It is time to stop burning our planet, and start investing in the abundant renewable energy all around us.”

Extinction Rebellion, also simply known as XR, is a global environmental movement. It was founded in the UK with the explicit aim of using nonviolent civil resistance to compel government action to avoid ecological collapse. The latest UN IPCC report paints a dire picture of what the future will bring. By 2050, a billion people will face coastal flooding from rising seas. Using radical tactics, Extinction Rebellion draws inspiration from grassroots movements such as the civil rights movement.  XR aims to instill a sense of urgency to prevent further climate breakdown and the ongoing sixth mass extinction. A number of XR activists accept arrest and imprisonment. The movement’s symbol is a stylized, circled hourglass to serve as a warning that time is running out for us.

Bill McKibben, co-founder of 350.org, is a leading environmental activist. He was one of the first to sound the alarm on climate change with his bestselling book The End of Nature. He is the author of The Age of Missing Information, Hope, Human and Wild, Deep Economy, Eaarth and The Flag, the Cross, and the Station Wagon. He is the Schumann Distinguished Scholar in Environmental Studies at Middlebury College and is the recipient of the Gandhi Peace Prize and the Right Livelihood Award. He is the founder of Third Act, which organizes people over the age of 60 for action on climate justice.

David Korten is a philosopher and visionary. For several decades he was an insider in the development establishment. He worked for the Ford Foundation and USAID and taught at Harvard’s Graduate School of Business. Having severed his ties to the past, today he is a leading voice for economic and social justice. He is a co-founder of YES! magazine and author of When Corporations Rule the World, The Great Turning, Agenda for a New Economy and Change the Story, Change the Future. 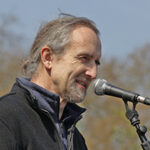 Roger Hallam is a Welsh organic farmer and environmental activist. He is co-founder of Extinction Rebellion, the cooperative federation Radical Routes and the political party Burning Pink.

Be the first to review “Environment 3-Pack” Cancel reply