Legal battles for gender equality didn’t begin with the Women’s Movement of the 1960s. But it laid the groundwork for the historic 1972 Supreme Court decision that made gender discrimination unconstitutional. That case was successfully argued by then-38-year old Brooklyn-born attorney Ruth Bader Ginsburg. It set precedent for another ruling a few years later that men should also be eligible for their wives’ survivor benefits. She won five out of the six gender discrimination cases she argued before the Supreme Court. 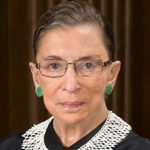 Ruth Bader Ginsburg, the “notorious” RBG, was a trailblazing force for equality. She was director of the ACLU Women’s Rights Project. She argued 6 cases before the Supreme Court, winning five of them. In 1993, she was appointed to the Supreme Court in 1993. She died in 2020 at the age of 87.