Is Noam Chomsky an anti-Semite? How about Amy Goodman and Naomi Klein? The question may sound absurd. Yet, according to the definition of anti-Semitism that more than 30 countries including the United States under the Biden administration have adopted, Chomsky, Goodman and Klein could very well be labeled as such. Why? They are critical of Israeli policies. Zionism is the late 19th century Jewish national movement. The origin of the term is the Hebrew word “Zion” often used as a synonym for Jerusalem and Israel.

Anti-Zionism is Anti-Semitism is the motion debated at the Emmanuel Centre in London. Before a large audience, this lively and contentious discussion features voices arguing pro and con.

The moderator is Carrie Gracie of the BBC. 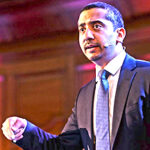 Mehdi Hasan is an award-winning journalist. He hosts The Mehdi Hasan Show on MSNBC. He is a former senior columnist for The Intercept and launched their Deconstructed podcast.

4 reviews for Anti-Zionism is Anti-Semitism