Historian Barbara Tuchman once wrote the “rejection of reason is the prime characteristic of folly.” The lack of urgency in addressing the eco-crisis is an example. Heat waves in India, floods in Texas, drought in California, melting polar ice caps, rising CO2 levels in the atmosphere and so much more, are still presented as unconnected dots. Climate summits come and go resulting in little more than lofty announcements. With an abundance of solar and wind energy at our fingertips it’s stunning and reckless that fossil fuelishness continues. As a sign said in Seattle protesting a huge Shell rig heading for drilling in the Arctic, “Good Planets are Hard to Find.” 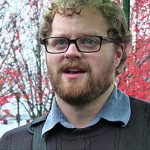