On May 24, 1990, a motion-triggered car bomb ripped through Earth First!er Judi Bari as she and co-organizer Darryl Cherney were driving through Oakland, California. They were heading to Santa Cruz to promote a campaign called Redwood Summer of nonviolent actions to stop old-growth forest logging in Northern California. It was proving incredibly successful in uniting environmentalists and timber workers against the unrestrained corporate-controlled felling of ancient California redwood trees. Judi Bari received numerous death threats in the weeks before the bombing. The police ignored her. But when the threat became reality, the FBI and Oakland police showed up at the bomb scene within minutes. But they promptly arrested both Bari and Cherney and charged them with bombing themselves. Even though there was no evidence to warrant such charges against these dedicated nonviolent activits, no real investigation of the bombing was ever undertaken. The true culprits of this assassination attempt still remain at large. In 1991, Judi Bari and Darryl Cherney sued the FBI and the Oakland Police for false arrest, illegal search and seizure and conspiracy to violate their First Amendment right to organize. Sadly, Judi died of breast cancer in 1997 before their case made it to trial. 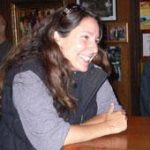 Alicia Littletree is an organizer for Earth First! She is active with the Redwood Summer Justice Project. Littletree is also a programmer at community radio station KZYX in Philo, California.

Be the first to review “Who Bombed Judi Bari?” Cancel reply