Capitalism in the Age of Digital Technology

﻿﻿Twenty fifteen was “a record year for deals,” the merger market exceeded $4 trillion, trumpets the business pages of The New York Times. Monopoly isn’t just a board game it is the animating dynamic of the economic system. Really existing Capitalism, which relies heavily on taxpayer support, embodies an almost genetic drive to consolidate, to dominate and ultimately to eliminate competition. This leaves people with fewer choices and higher prices, exactly the outcome desired by the monopolists. Democracy, particularly in the U.S., has largely morphed into an oligarchy run by and for plutocrats. As the ranks of the have-nots grow and inequality widens, and as the eco-crisis continues apace, one can expect a future of social unrest.

Edward Snowden’s remarkable revelations leave no doubt. Big Brother is here. The National Security Agency’s PRISM program is a clandestine mass electronic surveillance and data mining system. In plain English: it enables state spying on citizens. The American Civil Liberties Union says, “The things we do and say online leave behind ever-growing trails of personal information. With every click, we entrust our conversations, emails, photos, and much more to Facebook, Microsoft, Google and Yahoo. But what happens when the government asks these corporations to hand over their users' private information?”  What happens to our rights and expectations of privacy? The Information Superhighway as the Internet was once called has turned into a marketer’s dream and a place where our messages and intimate details of our lives disappear into the NSA’s new $1.5 billion, million square-foot complex in Bluffdale, Utah. 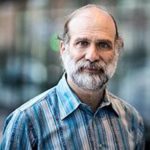 Bruce Schneier is a cryptographer and specialist in computer security technology. He is a fellow at the Berkman Center for Internet and Society at Harvard. He has briefed members of Congress on the NSA. He is the author of many books including Liars and Outliers: Enabling the Trust Society Needs to Thrive and Carry On.

Robert McChesney teaches at the University of Illinois at Urbana-Champaign. He is the author of many books including Digital Disconnect. He is co-author with John Nichols of Dollarocracy. He is the co-founder of Free Press, a national media reform organization. The Utne Reader listed him among its “50 visionaries who are changing the world.”

Be the first to review “TECHNOLOGY 3-Pack” Cancel reply