In this lecture, Ralph McGehee states, “The CIA is not now nor has it ever been a central intelligence agency. It is the covert action arm of the President’s foreign policy advisers. In that capacity it overthrows or supports foreign governments while reporting ‘intelligence’ justifying those activities. It shapes its intelligence to support presidential policy. Disinformation is a large part of its covert action responsibility, and the American people are the primary target audience of its lies.” 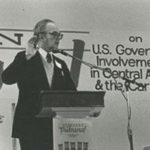 Ralph McGehee worked for the CIA from 1952 to 1977. After leaving the Agency he became an outspoken critic of its activities. He was the author of Deadly Deceits. Alexander Cockburn called it “one of the outstanding books written by a former CIA agent.” He died in 2020.

Be the first to review “CIA: Deadly Deceits” Cancel reply