The Politics of the Pandemic

It should be abundantly clear that part of the president’s m.o., almost an article of faith, is never accept responsibility when things go wrong. It’s always someone else’s fault: Pelosi, the media, the WHO, Obama, China, immigrants. And if you criticize the leader expect retaliation. Just ask Rick Bright, a top government scientist who was removed from his job he says because he opposed the president’s touting of hydroxychloroquine, an anti-malarial drug, as a coronavirus treatment. He has filed a whistleblower complaint. The president has called him “a disgruntled employee.” These are Rick Bright’s words of warning, "Our window of opportunity is closing. If we fail to develop a nationally coordinated response, based in science, I fear the pandemic will get far worse and be prolonged, causing unprecedented illness and fatalities. Without clear planning 2020 will be the darkest winter in modern history."

The Pandemic & the Economy: A Radical View

The standard narrative about the current crisis is that the coronavirus pathogen triggered an economic collapse. But what is crucially ignored is that neoliberal capitalism was already weak and stressed out, a pre-existing condition, if you will. That systemic weakness went into freefall when the pandemic hit. In its long history, capitalism has produced many booms and busts but this period, particularly since Reagan, has produced spectacular inequalities in wealth and income.  Tens of millions, if they even have a job, live paycheck-to-paycheck. We're all in this together? Right? That's what the signs say. But not the rich. They have their country estates, yachts and island retreats to shelter in place. The big question is: Once the crisis abates are we going to go back to business as usual, or will there be fundamental change?

What will tomorrow bring in the age of COVID-19? There is so much uncertainty. Arundhati Roy sees an opportunity. She writes, “Whatever it is, coronavirus has made the mighty kneel and brought the world to a halt. And in the midst of this terrible despair, it offers us a chance to rethink the doomsday machine we have built for ourselves. Nothing could be worse than a return to normality. Historically, pandemics have forced humans to break with the past and imagine their world anew. This one is no different. It is a portal, a gateway between one world and the next. We can choose to walk through it, dragging the carcasses of our prejudice and hatred, our avarice, our data banks and dead ideas, our dead rivers and smoky skies behind us. Or we can walk through lightly, with little luggage, ready to imagine another world. And ready to fight for it.” 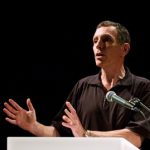 David McNally is the Cullen Distinguished Professor of History and Business at the University of Houston and director of the Center for the Study of Capitalism. He is the author of Global Slump, Monsters of the Market and Blood and Money.

Naomi Klein is a senior correspondent at The Intercept and Professor of Climate Justice at the University of British Columbia. She was the inaugural Gloria Steinem endowed chair of media, culture and feminist studies at Rutgers University until September 2021. She is an award-winning journalist and author of many books including: How to Change Everything, On Fire: The Burning Case for A Green New Deal,  No Is Not Enough, This Changes Everything, The Shock Doctrine, and No Logo. In addition to The Intercept her articles appear in The Guardian, Rolling Stone and The Nation.

Arundhati Roy is a world-renowned award-winning writer and global justice activist. Tariq Ali says of her she “is both loathed and feared by the Indian elite. Loathed because she speaks her mind. Feared because her voice reaches the world outside India and damages the myths perpetrated by New Delhi.” Among her many books are My Seditious Heart and Azadi.

Be the first to review “PANDEMICS II 3-Pack” Cancel reply