Since mid-September, tens of thousands of Iranians have taken to the streets across the country to protest the government's treatment of girls and women and in particular mandatory dress codes. These historic demonstrations center on women's socio-political rights and democratic governance in Iran. The government has brutally responded. Hundreds have been killed, including children. Many thousands have been arrested. Despite the regime's violent crackdown, protests have only widened. Demonstrators are shouting "Death to the Dictator." The Islamic Republic of Iran, now in its 43rd year, has never faced such sustained and widespread opposition. Can it remain in power? The slogan of the protest movement is Zan, Zendegi, Azadi/Woman. Life. Freedom. Interviewed by David Barsamian. Recorded at KGNU.

The Middle East is in turmoil. The hope and promise of the 2011 Arab Spring are now a distant memory. The toppling of the decrepit Mubarak regime in Egypt was greeted by many Egyptians with joy. But that elation didn’t last long. Since 2014, Egypt is ruled by General Abdel Fattah al-Sisi. Sisi has changed his uniform for an Armani suit. If you criticize him and his regime you can easily land up in jail or worse. There is something like 60,000 political prisoners in Egypt. In terms of freedom of the press, Egypt ranks 168th out of 180 countries. That doesn’t seem to bother Washington. Cairo is a major recipient of U.S. aid and is a lucrative market for Lockheed Martin, Raytheon and Northrup Grumman weapons sales. Meanwhile, off the radar screen is the ongoing Saudi/UAE bloodbath in Yemen. Interview by David Barsamian. Recorded at the Middle East Studies Association annual conference.

Autocracy: concentrated power in the hands of a few. The U.S. is linked to a network of Arab autocracies led by sultans, emirs, and military dictators who are called “allies” and “partners.”  Politics and economics make for strange bedfellows. Perhaps none is stranger than the one with the feudal regime of Saudi Arabia. The Washington/Riyadh axis goes back to 1945 when FDR met King Saud on a U.S. destroyer in the Suez Canal. The deal was struck. The U.S. would protect the Saud monarchy and in return, American corporations would have access to Saudi oilfields. In the decades since ties between the two countries have remained close. Today, the U.S. has been supporting the Saudi-led war in Yemen, which has resulted in almost 400,000 dead and millions hungry. Interview by David Barsamian. Recorded at the Middle East Studies Association annual conference. 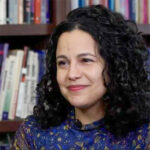 Marie Ranjbar is an Assistant Professor in the Department of Women’s and Gender Studies at the University of Colorado–Boulder. Her research examines social movements in Iran and integrates feminist political geography with critical human rights and decolonial feminist theory. Sarah Leah Whitson is the Executive Director of DAWN, Democracy for the Arab World Now. Previously, she was executive director of Human Rights Watch’s Middle East and North Africa Division from 2004 – 2020. She has led dozens of advocacy and investigative missions throughout the region, focusing on issues of armed conflict, accountability, legal reform, migrant workers, and human rights. She has published widely on human rights and foreign policy in the Middle East in international and regional media, including The New York Times, Foreign Affairs, The Washington Post, and Foreign Policy.

Rami Khouri has reported on the Arab region for decades. He is a senior fellow with the Middle East Initiative at the Belfer Center at Harvard’s Kennedy School. He was the Founding​ Director of the Issam Fares Institute for Public Policy and International Affairs ​at the American University of Beirut in 2006-14. He was Executive Editor of the Beirut Daily Star and before that Editor-in-Chief of The Jordan Times. His articles appear in major newspapers around the world.

Be the first to review “Middle East 3-Pack” Cancel reply