Dr. Martin Luther King, Jr has been shrink-wrapped and formatted to be innocuous and non-threatening. Dream speeches, desegregation, voting rights, and Selma marches could be accommodated. But when he articulated a critique of the system as a whole then he became a danger to the establishment. That Dr. King has been largely obscured. At Riverside Church in New York he said the Vietnam War was “a symptom of a far deeper malady.” And then he added, “We as a nation must undergo a radical revolution of values. We must rapidly begin the shift from a ‘thing-oriented’ society to a ‘person-oriented’ society. True compassion is more than flinging a coin to a beggar; it is not haphazard and superficial. It comes to see that an edifice which produces beggars needs restructuring.” By giving that speech Dr. King basically signed his own death warrant. 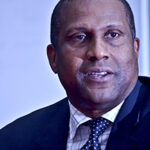 Tavis Smiley was a PBS and public radio talk show host. He is the author of many books including Death of a King: The Real Story of Dr. Martin Luther King Jr’s Final Year.

1 review for The Hidden Dr. King