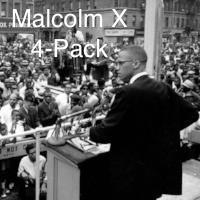 The Ballot or the Bullet

Malcolm X is a singular figure in African-American history. He led an extraordinary life. He was born in an impoverished family in Omaha, NE on May 19, 1925. He recalled being “dizzy” with hunger. He said, “My whole life has been a chronology of changes.” Indeed it was. He went through a remarkable series of transformations from being a street hustler known as Detroit Red to going to jail, to converting to Islam then breaking with Nation of Islam leader Elijah Muhammad and becoming an independent voice for black dignity, self-reliance, and economic independence. Malcolm challenged the racist white power structure and the blacks who went along with it. He was only 39 years old when he was assassinated on February 21, 1965 in New York. Maya Angelou said of him, “His aura was too bright.” He had a charismatic presence and a radiant smile. And he was an electrifying orator. At his funeral, Ossie Davis eulogized him as our “prince. Our own black shining prince.” Today, Malcolm’s autobiography continues to be read and his words continue to inspire.

Malcolm X and the Politics of Race

Malcolm X's life represents an extraordinary evolution and transformation from street hustler and ex-con to an intellectual visionary with a race and class analysis. He went from being a narrow nationalist to incorporating a broad global perspective. He articulated a strong challenge to the system of power and privilege. Consequently, the FBI wiretapped Malcolm, read his mail, and kept him under surveillance. On February 21, 1965 Malcolm X was gunned down at the Audubon Ballroom in West Harlem. In his final year he gave fiery talks throughout the country, including the famous Ballot or the Bullet Speech from King Solomon Baptist Church in Detroit. This special program marks 50 years since his assassination.

By Any Means Necessary: Malcolm X

The singular voice of Malcolm X speaks today to more people than ever before. He endures as a powerful and inspirational figure. It's not hard to understand why. With his mesmerizing oratorical style and cadence it was Malcolm who redefined the discourse on race. He moved the discussion from notions of "prejudice" and "discrimination" to racism. It was Malcolm who articulated concepts like "community control" and "white power structure" and “the field Negro and the house Negro.” It was Malcolm who made it clear that Blacks were the victims of a system of domination and exploitation that was not regional but national, not superficial but structural, not episodic but ongoing and intentional. His uncompromising critical analysis gave Malcolm his moral authority. He was assassinated on February 21, 1965, but as new generations discover him, his ideas live on.

Malcolm X and the Struggle for Black Liberation

Malcolm X is one of the towering figures in the struggle for black liberation. He has been identified as an articulator of the rage of black youth and a symbol of pride and defiance. But he was much more than that. Malcolm X was a major thinker and theoretician of black liberation. In the year before his assassination in February 1965, he underwent enormous intellectual growth and transformation. He moved from being a narrow nationalist to embrace a much more global perspective.

Recorded at the Brecht Forum.

Malcolm X, born Malcolm Little, also known as El-Hajj Malik El-Shabazz, was a prominent human rights activist. To his admirers he was a courageous advocate for the rights of blacks, a man who indicted white America in the harshest terms for its crimes against black Americans; detractors accused him of preaching racism and violence. He has been called one of the greatest and most influential African Americans in history. In February 1965, shortly after repudiating the Nation of Islam, he was assassinated by three of its members. The Autobiography of Malcolm X, published shortly after his death, is considered one of the most influential nonfiction books of the 20th century.

Manning Marable, a renowned scholar, was professor of public affairs, political science, history and African American studies at Columbia University. His syndicated column “Along the Color Line” appeared in over 400 newspapers and journals worldwide. He’s the author of many books including How Capitalism Underdeveloped Black America, Living Black History, and his masterwork Malcolm X: A Life of Reinvention. Manning Marble died in New York in 2011.

William Sales is a scholar and noted expert on Malcolm X. He is professor at Seton Hall University, where he chairs the Department of Africana and Diaspora Studies. He is the author of From Civil Rights to Black Liberation: Malcolm X and the Organization of Afro-American Unity.

Be the first to review “Malcolm Lives 4-Pack” Cancel reply