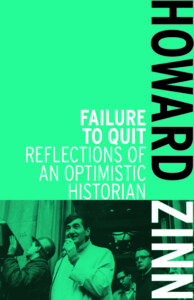 Failure to Quit: Reflections of an Optimistic Historian

In this lively collection, Zinn discusses historical and political topics, ranging from Columbus; The Bill of Rights; the role of the Supreme Court; and higher education. Failure to Quit includes two of his most famous essays: “The Optimism of Uncertainty” and “The Problem is Civil Obedience” as well as the classic Barsamian-Zinn interview: “Who Controls the Past Controls the Future.”

Be the first to review “Failure to Quit: Reflections of an Optimistic Historian” Cancel reply