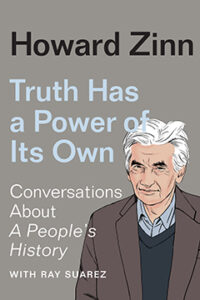 Truth Has a Power of Its Own: Conversations About A People’s History

Truth Has a Power of Its Own is an engrossing collection of conversations with the late Howard Zinn and “an eloquently hopeful introduction for those who haven’t yet encountered Zinn’s work” (Booklist). Here is an unvarnished, yet ultimately optimistic, tour of American history—told by someone who was often an active participant in it.

Viewed through the lens of Zinn’s own life as a soldier, historian, and activist and using his paradigm-shifting A People’s History of the United States as a point of departure, these conversations explore the American Revolution, the Civil War, the labor battles of the nineteenth and twentieth centuries, U.S. imperialism from the Indian Wars to the War on Terrorism, World Wars I and II, the Cold War, and the fight for equality and immigrant rights—all from an unapologetically radical standpoint. Longtime admirers and a new generation of readers alike will be fascinated to learn about Zinn’s thought processes, rationale, motivations, and approach to his now-iconic historical work.

Zinn’s humane (and often humorous) voice—along with his keen moral vision—shine through every one of these lively and thought-provoking conversations. Battles over the telling of our history still rage across the country, and there’s no better person to tell it than Howard Zinn.

Howard Zinn, professor emeritus at Boston University, was perhaps this country’s premier radical historian. He was born in Brooklyn in 1922. His parents, poor immigrants, were constantly moving to stay, as he once told me, “one step ahead of the landlord.” After high school, he went to work in the Brooklyn Navy Yard. During World War II, he saw combat duty as an air force bombardier. After the war, he went to Columbia University on the GI Bill. He taught at Spelman, the all-black women’s college in Atlanta. He was an active figure in the civil rights movement and served on the board of SNCC, the Student Nonviolent Coordinating Committee. He was fired by Spelman for his activism. He was among the first to oppose U.S. aggression in Indochina. His book Vietnam: The Logic of Withdrawal was an instant classic. A principled opponent of imperialism and militarism, he was an advocate of non-violent civil disobedience. He spoke and marched against the U.S. wars on Afghanistan and Iraq. His masterpiece, A People’s History of the United States, continues to sell in huge numbers. Among his many other books are You Can’t Be Neutral on a Moving Train, Failure to Quit: Reflections of an Optimistic Historian and Original Zinn with David Barsamian.  Shortly before his death he completed his last great project, the documentary The People Speak. Always ready to lend a hand, he believed in and practiced solidarity. Witty, erudite, generous and loved by many the world over, Howard Zinn, friend and teacher, passed away on January 27, 2010. He would say, Don’t mourn. Get active. The struggle for peace and justice continues.

Be the first to review “Truth Has a Power of Its Own: Conversations About A People’s History” Cancel reply