As part of AR’s World Poetry Series, this program covers classical and modern Chinese poetry from 700 BC to the present. David and Bill discuss the differences between ancient and contemporary Chinese language, the relationship between Chinese poetry and music, recent discoveries of authentic ancient poetry texts, and the influences of both Buddhism and 20th-century culture on Chinese poetry.

Funded by a grant from the Boulder Arts Commission. 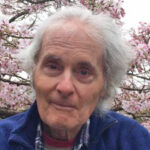 Bill Doub was a noted scholar of Oriental culture. He taught at the University of Colorado. He and his wife Nancy edited and published the Bulletin of Concerned Asian Scholars. He participated in numerous protests and non-violent actions against war and militarism. And he rode his bicycle everywhere. He died in 2017.