The Mandaeans of Iraq

This program is about the Mandeans of Iraq. They are an ancient community who follow Madeanism, a Gnostic religion. Small in numbers they speak a Semitic language related to Aramaic. Their belief system influenced other religions that followed. They say they are descendants of John the Baptist. Rudolph says, “They believe it but it is not sure historically.” Sunday is their holy day and they worship on the banks of rivers. Water is an essential part of their rituals. Baptism occurs every Sunday. 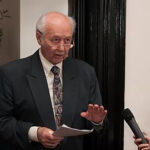 Kurt Rudolph was the Chair of History of Religions at Karl Marx University at Leipzig in the German Democratic Republic. He was an internationally renowned expert on the Mandaean religion and culture. He is the author of Gnosis: The Nature and History of Gnosticism. He died in 2020.

Be the first to review “The Mandaeans of Iraq” Cancel reply