The Slide to War with Iran

The U.S. and Iran are on a collision course. The name-calling and saber rattling are ominous. The New York Times headline reads: “Iran Calls U.S. ‘Desperate and Confused.’ Trump vows ‘Obliteration.’” Is Iran going to commit suicide by attacking the world’s most lethal military? Washington is exerting what it calls “maximum pressure” on Iran and on anyone who wants to do business with that country. For most Iranians the punitive sanctions the U.S. has imposed are a form of warfare, albeit the economic kind. The Iran nuclear deal was working just fine according to the UN when Washington unilaterally abandoned it thus triggering the current crisis and the slide to war. The attitude emanating from Washington is more like that of a bully: You do what I tell you or else. Respectful dialogue is what is needed, not hectoring and badgering. Interviewed by David Barsamian. Recorded at KGNU.

Given that people in the U.S. spend more money on health care than the rest of the world combined, then logic would dictate that we have the best health outcomes. Well, we don’t. Why? Increasing evidence from epidemiologists— the scientists who study the health of populations — indicates that everything from life expectancy to infant mortality to obesity, can be linked to the level of economic inequality within a given population. Almost a quarter of U.S. families live in poverty, the highest of all rich nations. Poor health and poverty go hand-in-hand.  Checkups are deferred. Pain is endured. People engage in wishful thinking, i.e., maybe that numbness in my foot will just go away. Single payer universal health care would go a long way toward addressing our absurdly expensive health care system and reducing the number of unnecessary early deaths. 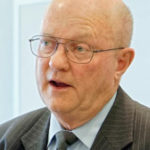 Dr. Stephen Bezruchka is on the faculty of the Department of Global Health and the Department of Health Services at the University of Washington. He worked for many years as an emergency physician in Seattle. He worked in Nepal for more than a decade where he helped set up a community health project a week’s walk from the road. He also established a remote district hospital for training Nepali doctors whom he supervised.

Be the first to review “July 2019” Cancel reply