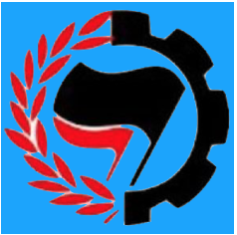 What is fascism? Michael Parenti, author and historian says, “Fascism historically has been used to secure the interests of large capitalist interests against the demands of popular democracy. Then and now, fascism has made irrational mass appeals in order to secure the rational ends of class domination.”  Fascism flourishes in times of economic insecurity and cultural backlash. Opportunistic politicians offer up a platter of racism, xenophobia and hyper-nationalism. They stoke fear and resentment using simplistic slogans such as “Drain the Swamp” and “Build the Wall.” In the U.S. today, there is a whiff fascism in the air. Witness the march of white supremacists with torches held high in Charlottesville chanting “Blood and Soil,” an old Nazi slogan and “Jews Will Not Replace Us.” The president called them “very fine people.”

One dictionary defines fascism as, “A system of government that exercises a dictatorship of the extreme right, typically through the merging of state and business leadership, together with belligerent nationalism.” The first fascist party was founded by Mussolini in Italy in 1915. Its etymology is traced to the Latin word meaning a bundle of rods tied around an axe, an ancient Roman symbol of authority. Today, the term, for many, immediately conjures up horrific images of storm troopers. But contemporary fascism has undergone a major wardrobe change. Could it happen here? Some see elements of it now with what is called populism, America First, coupled with a largely imagined past, Make America Great Again. The media are denounced as “the enemy of the people,” a phrase Stalin used. Critics of the Leader are bullied and insulted.

Fascism is being mentioned more and more in the context of U.S. and European elections. It is a term that is bandied about often rather loosely. Orwell wrote that it is understood to be "something not desirable." But it is a complex political and economic synergy that has racism, force and nationalism as its animating matrix. It involves heavy doses of propaganda and media manipulation. Mussolini, in one of his more honest moments said, "Fascism should be more properly called corporatism, since it is the merger of state and corporate power." For Americans it is universally associated with despotic regimes in other countries. It can't happen here. Huey Long, the self-styled populist governor of Louisiana, once warned, "If fascism ever comes to America, it will come wrapped in an American flag."

Us versus them politics, pitting one group against another, is as old as the hills. Vulnerable groups are targeted. Language is weaponized. And resentment is mobilized along race, class and gender lines. Unbridled nationalism with lots of flag waving is the soundtrack. The rise of the right in the U.S. did not occur overnight. It didn't happen because millions of people suddenly started listening to Alex Jones or reading Breitbart News. The widespread influence of right-wing ideology is not unique to this period in U.S. history. Its roots are deep and the historical trends point the way to where we are today: the right has a firm grip on many political and cultural institutions. The Koch Brothers, Sheldon Adelson, Robert Mercer and others with their deep pockets bankroll many so-called conservative organizations that promote unregulated, predatory capitalism and climate change denial. Recorded at the Z Media Institute.

George Orwell and Aldous Huxley are two of the great figures of the 20th century. Their novels, 1984 and Brave New World focus on authoritarianism. Both draw grim pictures of totalitarian rule but in each book the dictatorship to effect control deploys different techniques. For Orwell it’s straight out force. His dark image is brutal state oppression—“a boot stamping on a human face—forever.” Big Brother is watching your every move. You can be arrested at any time. Endless war is in the background. Whereas, in Huxley’s dystopia, societal control is achieved by more subtle means such as entertaining diversions, staged spectacles and the directed pursuit of manufactured needs and desires. People are infantilized. They are to be concerned with trivia like shopping, celebrity divorces and scandals leaving them with little time or interest to challenge power.

Chip Berlet is an investigative journalist and coordinator of the Building Human Rights Network. His byline has appeared in scores of publications, including The New York Times, The Boston Globe and The Progressive. For many years he served as senior analyst at Political Research Associates.

Henry Giroux, a prominent public intellectual, prolific writer, commentator, and scholar. He teaches at McMaster University in Hamilton, Ontario. He is a founding theorist of critical pedagogy. Among his many books are Neoliberalism’s War on Higher Education, The Violence of Organized Forgetting, and America at War with Itself. He is a member of Truthout‘s Board of Directors and a regular contributor to the nonprofit, independent online news organization.

1 review for AR Primer on Fascism